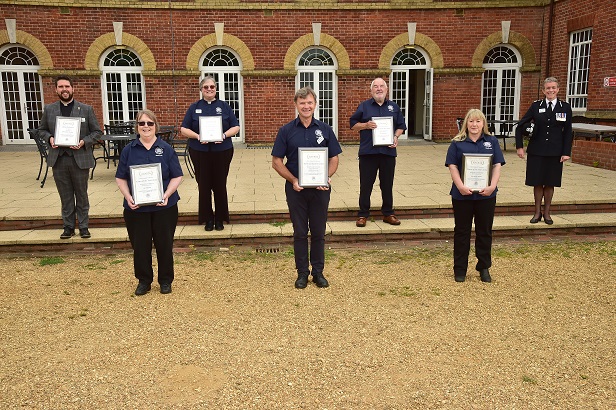 Pictured above:
(Some of!) The Hampshire Constabulary Volunteer Team of the Year with Chief Constable Olivia Pinkney and Lead Chaplain Rev’d Dom Jones.
The team were presented their award in a socially distanced award ceremony in August 2020

The fundamental role of a chaplain is to provide safe, independent, confidential support and understanding to all, regardless of whether any defined religious belief is followed. The volunteer chaplaincy team are deployed Force wide based in different police stations to offer a confidential listening ear to those of all faiths or none.

The chaplains spend a lot of time walking around the stations building relationships with the officers and staff and also accompany them on operational patrol to get an insight into the policing world, chaplains also support Force wide events such as interfaith week, baby-loss week and inclusion week. They and have also “staffed” the wellbeing van during its visit to Basingstoke PIC after the death of PC Andrew Harper.

Feedback across the Force has been incredibly positive with comments such as:

“Chaplaincy been excellent/helpful/supportive and well worth having - you’re making a big difference!”

“The past 12 months have been very tough... Our force chaplains have been nothing short of superb throughout. An ear to listen and shoulder to lean on has once again been of tremendous support to our officers…”

“The work of the chaplaincy is often mentioned in numerous meetings due to them ‘plugging’ gaps in the area of wellbeing, pastoral care and advocacy.”

The volunteer chaplaincy team sit within the Citizens In Policing department of the Force and have been awarded team of the year 2019.