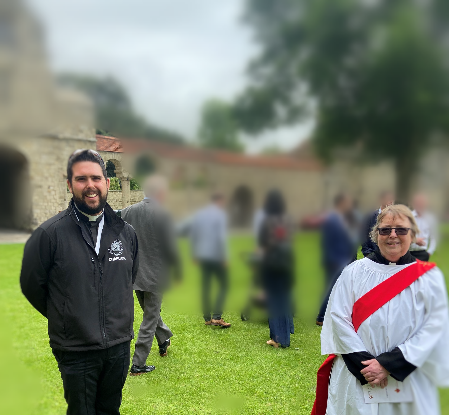 Throughout her career Liz Williams 62 has been inspired by her faith and has always wanted to serve people within the local community.

Initially Liz worked as a secretary for 17 years at a Southampton hospital, and after feeling a pull towards church she attempted ordination. However, it wasn’t the right time, and she went to study at Solent University to give herself a stronger educational foundation. After receiving her Master’s degree Liz decided to stay at the university to offer student support after she recognised a need for someone to bridge the communicative gap between students and the academics. During her time as a student support worker Liz enjoyed building relationships and being a mediator for those who struggled to communicate.

Liz later went to work in student support in two FE colleges, and now also volunteers as a police chaplain in a station in Southampton as part of a team offering multi-faith support to police officers. As a police chaplain Liz and the team provides the officers with an outlet, and a space for them to be open with their thoughts and feelings. Liz finds the work incredibly valuable and learnt the importance of nurturing well-being.

Lead chaplain to Hampshire Constabulary, Revd Dom Jones, says, “I wish we had more people like Liz. You don’t need to be ordained to be a police chaplain and support the amazing work our police officers do on our behalf to keep us safe and protected. The fact that Liz is now ordained is a bonus to the team and I look forward to her continuing to offer the confidential listening ear that we are known for.”

While training for ordination, Liz has held onto the principles of chaplaincy, and is hoping her experience will not only translate into her parish work but help evolve Church practise.

Liz said: “I have always felt a pull towards service, to meeting people, thinking of others and coming alongside them. I am looking forward to working in the church and helping to resource people within the community.”

With thanks to the Diocese of Winchester for the article