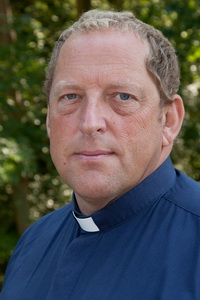 David, a former Police motorcyclist, was ordained in 1988 and held parish ministries in the North West of England, was a Prison Chaplain at a Young Offenders Institute and was involved in a large scale Eastern European Aid project in Romania. In 1994 he moved to Surrey Police as their Welfare Manager specialising in the impact of Trauma on Police personnel.

In 2007 he was appointed as full time Force Chaplain with Thames Valley Police. In 2009 he was elected to lead the National Association of Chaplains to the Police [NACP] as National Police Chaplain. The association was relaunched as ‘Police Chaplaincy UK’.

In July 2018, having secured funding from Police & Crime Commissioners, David relinquished his role as Lead Chaplain at Thames Valley Police to concentrate on the role of National Police Chaplain providing a resource for Police Forces, individual Force Chaplaincies and all related organisations.

David is the Coordinator of National Police Memorial Day held each September and responsible for the organisation of this important annual event of national significance. David is also Chair of the Police Roll of Honour Trust and is engaged with Police Charities UK; The Advisory Board of the Police Firearms Officers Association; and is a trustee of Crossways Counselling Service. He is involved in bringing to fruition the proposed new UK Police Memorial to be sited at the National Memorial Arboretum. He was awarded the MBE in the 2020 New Year’s Honours List for ‘services to Policing.

His interests include sailing, motorcycling and politics as well as his dogs ‘Barney’ and ‘Badger’.

He thinks a good prayer for anyone is ‘Dear Lord, help me to be the kind of person my dog thinks I am!.