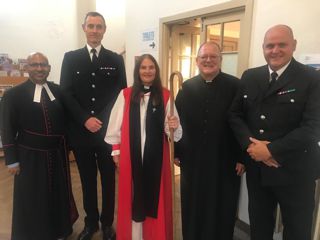 Derek’s licensing took place in St Peters Warmsworth and was led by the Rt Rev Sophie Jelley, Bishop of Doncaster. It was good to see a diverse representation of both the police, church and community in attendance. Everyone including the High Sheriff of Doncaster were welcomed by the Associate Archdeacon Father Stephen Edmunds, Central to the service were our two readings from Scripture. A reading from the bible -  Matthew’s Gospel 9.35-38 which talks about the needs in the communities around us and the compassion and care shown by Jesus, a hallmark of Derek’s care and support for the force. It also talks about the labourers being so few which again is Derek’s prayer to grow a multi faith team. The second reading was from the second letter of Paul to Timothy which talks about holding firm, being proud and trusting. Prayers for the community, church and police were jointly led by Derek and the Reverend Cannon Ian Smith where peace and justice were a central theme.