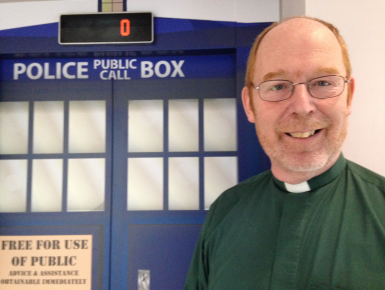 Durham Constabulary's Lead Chaplain and Deputy National Police Chaplain, the Revd Adrian Gatrill, is to be made a Non-Residentiary Canon of Durham Cathedral.

The position is an honorary one and is offered to clergy who have made a significant contibtion to the life of the church within the diocese. The offer of a canonry was made to Adrian by the Bishop of Durham, the Rt Revd Paul Butler, "in recognition of your work as police chaplain."

Adrian became Durham's Lead Chaplain in 2011 after serving for nearly twenty-three years as a chaplain in the RAF. Of his appointment he said, "This is a huge honour and came as a complete surprise, especially as I've been in the Diocese of Durham for such a relatively short time. The biggest compliment is that police chaplaincy has been recognised as an important area of the church's ministry, and that is very gratifying."

The service at which Adrian will be installed as a Non-Residentiary Canon will take place in Durham Cathedral on Sunday 19 June at 3.30pm.